I’m a little behind in my blogging so this short Holiday happened a few weeks ago to Ayers Rock or Uluru as its known by the traditional land owners.
My family and I decided to take a shot holidays rather than giving birthday and Christmas presents but as we found out these can happen anytime of the year and we still get birthday and Christmas presents. I’m not sure what’s going on their but my sister and I don’t seem to complain.

So back to the story, Thursday we grove to the Sydney airport running late as usual and dad not wanting to use the GPS until the last minute and then complaining and arguing with it costing us another 20mins. In the meantime I’m being optimistic and creative telling my sister how close we are and will be there in a few mins.

About 30mins later she just rolls her eyes as we arrive and the departure terminal. We take bets on which one of us is going to get stopped at security as we get our bags ex rayed. We can’t believe our luck passed with no incidents, then have to wait for dad as he’s carrying  scissors in his first aid kit.

Anyway nothing eventful happens on the 3hr Virgin Australia flight apart from a few bad jokes about not been in a virgin for a while and there’s more room in this virgin than the last one.

Ok I’ve lost a few readers now but it almost made dad spit his drink everywhere so I think the comment was worth while.

From the airport we took a 10min coach transfer to our accommodation Sails in the Desert. My sister and I had a twin room with two queen beds and a beautiful aboriginal painting on the wall. Mum and dad were next door.

Only one of our two electronic room keys worked which turned out to be a highly amusing game which I played with my sister. I gave her the choice of cards and she managed to get it wrong 8 times out of 10 so the more we played the funnier it became.

So we dumped our gear and went straight outside and walked 2km I think it was to Uluru lookout. As you can see the desert sand was an amazing orange red colour but rather course and sort of stained you hand. I wish I’d brought a small jar of it home to place on my desk at work.

The lookout was very beautiful but very windy and we managed to get sandblasted. I Always find it nice to listen and absorb the new environment, sight sound and smells. I love all the new bugs and birds apart from this was the middle of the day and not much was out.

When we get back to the resort I went for a swim, because it was windy I had the whole pool to myself. That was super cool as I floated on my back and started daydreaming. 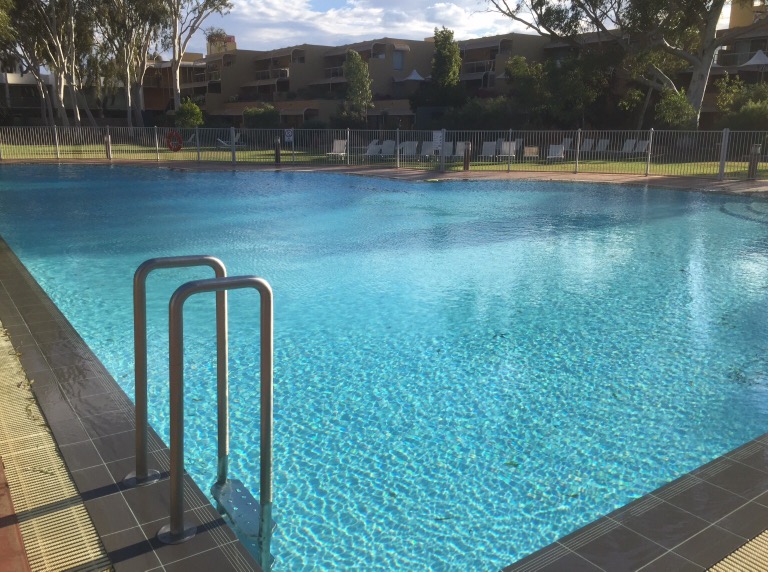 I can’t say much about the rest of the resort because we were either on a tour our out walking. We had dinner their but felt rushed as soon as your plate looked almost empty it was taken away wether you we’re finished or not. Dad wasn’t happy about that but I tend not to stress on holiday. So what you didn’t get to eat your last two carrots just have more desert.

We later went back with mum and dad to experience the sunset but were a little to late. That’s ok we caught a nice one the next night.

A couple of videos of Uluru lookout midday, sunset and sunrise.